Food Waste and the Environment

Climate change, or the change in global or regional climate patterns, is one of the most discussed topics around the world at the present moment.  Even though global climates have changed many times during the entire life span of the earth, there is much more concern surrounding the recent changes from the mid-20th century and onward.

From 1990 to 2010, there has been a 35% increase in the total amount of greenhouse gasses in the atmosphere, and in 2017 53.5 gigatons of greenhouse gasses were measured in the atmosphere, which was an all-time high.  There is currently no sign of these numbers reaching a peak and leveling off or reducing since there has not been significant reduction in actions that produce these gasses.  However, the Intergovernmental Panel on Climate Change has reported that emissions need to be reduced to zero by 2050 to limit the global temperature increase to 1.5° C.  Global warming is a large contributor to the overall patterns of climate change, so having the temperature continue to rise results in many detrimental impacts. This graph shows the rising amounts of CO2, CH4, and N2O in the atmosphere over the past 20 years.  It also includes several fluorinated gases that are also present in the atmosphere (but in very small quantities).

The human activities that produce the most greenhouse gasses are electricity and heat (31%), transportation (15%), manufacturing (12%), agriculture (11%), and forestry (6%).  Most of these industries, such as transportation, electricity, and manufacturing, burn large amounts of fossil fuels, which is the main producer of greenhouse gasses globally.  The main sources of the gasses from agriculture come through rice production, livestock rearing, and agricultural soils.  Forestry absorbs CO2 from the atmosphere, but it also acts as a source of gas emissions.  May of these industries are integral parts of people’s livelihoods, so reducing emissions in these areas requires collaboration across many disciplines and nations with the goal of putting the environment first.

A rise in global temperature by 1.5° C may not seem like much, but it is enough to harm the lives and livelihoods of hundreds of millions of people around the world, as well as the earth and its ecosystems.  One of the most impacted areas of global warming are the earth’s oceans.  They currently provide half of the world’s oxygen and are home to hundreds of thousands of species.  However, the increase in the earth’s temperature causes ocean temperatures to rise, and the increase in CO2 makes the oceans more acidic.  These factors result in a significant increase in the dying off of sea creatures, which is catastrophic for those ecosystems and the 1 billion people worldwide who rely on them for food.  Ice caps are also melting at a very quick rate, causing the sea levels to rise and flood coastal regions where people live, sometimes forcing them to move away to find a new home.  It also hurts the polar ecosystems, since there is less food and space to support life like penguins, seals, and polar bears. 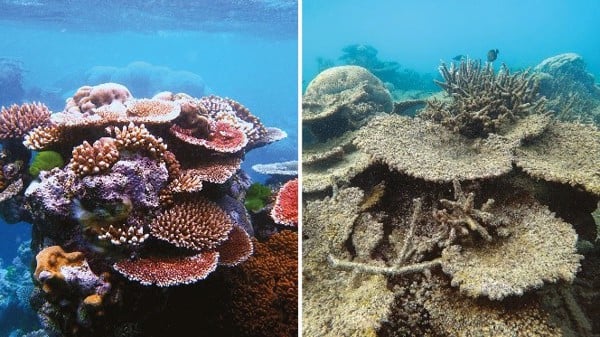 Coral reef killed by changes in ocean temperature and acidity

Rising temperatures change the overall makeup of a region in terms of water availability, growing season length for crops, and average temperature, which in turn affects what organisms can live there and what crops can be grown.  Some animal species are forced to adapt to their changed environment, otherwise they need to relocate or end up becoming extinct if their area becomes uninhabitable.  Some species require very particular environments to survive and thrive, and significant environmental changes force them to move to a higher altitude or cooler other location, typically away from the equator.  However, there are only so many places these crops or animals could be moved to that meet their specific needs, and some of these regions are already inhabited by people and other ecosystems that do not want outsiders.  And if the climate keeps changing, these ideal locations will become rarer. Wine grapes are a species that is very sensitive to changes in climate, since their immediate environment affects their flavor.  In order for a company to keep producing the same quality wine, they need to find new locations to grow their grapes that match the old environment.

The warming of the earth also affects the global climate patterns, causing natural disasters like floods, fires, and heat waves to happen more frequently and with a higher intensity.  Each of these causes a lot of damage to many people, ruining crops, destroying towns, and overall harming millions of people each year.  The increasing frequency and destructive power of these will continue to increase as the earth’s temperature rises, so if drastic change is not made in the very near future to reduce emissions, the temperature will continue to increase and affect all the earth’s inhabitants.  The poor people will be (and already are) affected the most disproportionally, since many already lack access to enough basic goods to meet their daily needs, and climate change will merely exacerbate that. Even though some people still deny that climate change is caused by human actions and is something to be worried about, it is indeed a very real issue that affects people and ecosystems all over the world.  As daily human activities release greenhouse gasses into the atmosphere, the global temperature rises, and natural disasters become more frequent and intense.  In order to have an earth that is still capable of supporting life in the future, it is imperative that people recognize this issue and take action to make change.